Somehow in two weeks I will be preparing to drive to Duluth for the Superiorman Triathlon. I don’t know how this happened. My training has been seriously lacking, but I’m going for the adventure anyways. There’s a huge chance that I will be a DNF (did not finish). But with my one little word for 2015 being “Chance” I have to do it. I can’t wait until next year. There is no way that next year I’ll be more ready for the course.

In May and June I was great at completing workouts and making sure I got plenty of time in the bike saddle. But after I went to Chile and Bolivia, and got sick….the workouts have not been as great. Last weekend I did do a duathlon workout a run, bike, run, however there was plenty of walking included in the “run” portions. 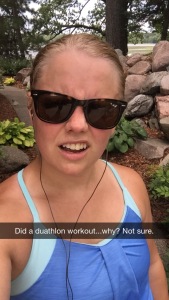 I keep claiming I’m going to swim more, but it doesn’t actually happen. I did manage to go to the Tuesday morning bike group, and had a great first half of the ride. We did an out and back route and I really struggled to keep the pace on the second half.

Thankfully I finally went back to yoga on Monday, and I took a class at Corepower on Wednesday. I also purchased a 10 pack, so I’ll have a good outlet for releasing stress because….

The next two weeks also include me being in a wedding, and hopefully starting a new job! (More details on this to come). In addition, I have every weekend in September filled with plans. Thank goodness I’m used to a crazy schedule.

What would you do? Cancel the race until next year? Or just go enjoy it and not worry about the finish time/fitness level?