Monday is here!! (I’m totally typing this Sunday night, so when this post goes up I’ll be just about to start teaching my Yoga Sculpt class of the day.)

I’m starting to realize that summer is wrapping up, Saturday night I had to say goodbye to a friend who is leaving for her second year of optometry school (eye doctor) and she won’t be home until Christmas!!!! I huge part of me hopes she changes her mind, and I really need to figure out how/when to go visit her in Oklahoma.

That being said, I’m trying to jam pack my days with outdoor activities to think back on once winter comes. Saturday morning I participated in the Deerwood Summerfest 5k. I’m not entirely sure how many years the race has been going on (maybe 3?) but it was a really great small town event! The race fee couldn’t be beat $25, which included a t-shirt and a beverage at the legion post-race (I had a beer). 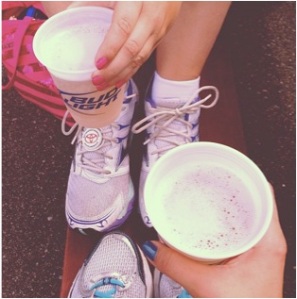 While I knew a lot of people participating, what sealed the deal for me was racing on the same course as my racing buddy. She and I aren’t close the same pace (she’s super speedy) but its fun to hang out before and after races. 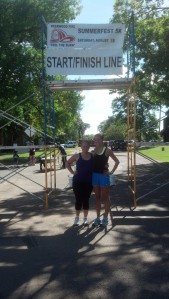 This is our fifth race together since December, and we’re already discussing adding the Monster Dash (October) and Polar Dash (January 2014).

The race itself was an easy out and back course. It wasn’t closed, so technically vehicles could drive, but there weren’t any issues. The winner of the race finished in 17:40 or something like that, but there were many people walking or running with strollers. If anyone in the Lakes area is thinking about a first 5k race, this is a great option!

I took off much faster than I usually do, and haven’t had a chance to check my garmin for stats, but I believe it was well under 10 minutes for the first mile, which is very rare for me. My finish time was roughly 30:35. My hip was really bothering me at the end, but I was pleased with the speed I had.

Like I promised in the title, I have some new music finds to share.  At the end of summer I feel like some songs have become super over-played and I don’t want to listen to them anymore even though I loved them in June and July. Here are 10 songs I recently downloaded and am loving, divided into the 2 genres I usually listen to.

Wake Me Up – Avicii

Come to Me – The Googoo Dolls

She Will Be Free – Josh Abbott Band

Could it Be – Charlie Worsham

Wake Up Lovin’ You – Craig Morgan