Shhh…I don’t want too many people to know this…but I think I just ran the most beautiful race in Minnesota!

I didn’t think I’d love the race. I was pretty sure it would end in tears, or at least a very bad mood. My GPS was acting weird on the drive to packet pickup and I took the long way to get to Grand View….turn at the 2nd entrance for 77, not the first (unless you want to go 35 mph around all the resorts, which I did not!) Also the parking was a nightmare, and I went to 3 wrong buildings before finding the right one.

I made the mistake of talking to the Minnesota Pacers Team coordinator at packet pickup and he was a jerk. He acted like a total bigshot and told me that if someone can’t do a half marathon in under 2 hours they shouldn’t even think about attempting a full marathon. Well thanks jerk. I’m already signed up for Grandma’s full, and I already told you that, plus I told you I’m injured and had to switch down to the 10k. Way to make me feel even worse than I already do!

I drove home Friday night not even wanting to get ready for the race. I had a restless night of sleep, and woke up not wanting to eat my usual pre-race breakfast (coffee, and toast with pb) but reluctantly made it, and even was able to eat it in the car. My friend Kayla planned on picking up her packet prior to the race and the GPS thought The Nisswa Community Center was the Nisswa Community Library. We found it hard to believe that the packets were in a locked library, but we wandered around and eventually found the correct building.

Eventually the energy of the race and the beautiful weather started making me feel better. I hugged my friends doing the half marathon and we went to our start lines. The 10k was a smaller group of people (218) and I heard this is the 2nd time they have offered a 10 k distance.

When I looked at the course info there was no mention of water stops, so I brought my Nathan Handheld to be sure that I would have water when I wanted it.

I debated but ended up taking a peanut butter flavored Gu right we took off. I’m glad I did! My peanut butter toast was eaten 2 hours prior to the race start, so I was happy to have a little more energy.

The race had a countdown start, and we never crossed a timing mat, so I’m assuming our timing chips were pre-activated. I was surprised that there were quite a few water stops through the first half of the course. The 10k course overlaps the marathon course, so watching the signs was important, but very easy! I got a little confused by the mile markers during a 10k race, but I had my garmin with to judge the distance and time.

The course features some small hills none of which were too extreme, and had plenty of shade and sunshine. 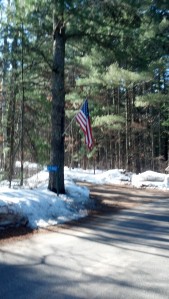 The weather was absolutely perfect! At first my shins were hurting, which usually only happens on the treadmill for me. But after a mile my body loosened up. My shoes were tied a little too tight, but I was afraid if I stopped I would get out of my groove. I also felt a pebble in my shoe but couldn’t wiggle it around, so I now have a lovely blister.

At the 2 mile mark I was waiting for my knee pain to come, and then I decided to take my mind off of it in case I started imagining the pain. At mile 3 I was still feeling good, and at mile 4 I was surprised. I still hadn’t walked. I was feeling relatively good and my pace was average. When mile 5 came up I told myself that I can do anything for 1 mile. This was the point where I started really passing people (mind you I had been almost dead last at mile 1). In the last 2 miles I probably passed 6 people and wasn’t passed by anyone (other than  runners of other races).

Prior to the race all I wanted was to finish.  As I was running I realized my pace was solid, and I had a chance of meeting and maybe beating my Securian 10k time. I wasn’t positive what that time was, but thought it was somewhere around 1:20. I decided I would be happy with finishing within 1:15, and I would be overjoyed at 1:10. And if things went well in the last mile or so, I had a chance of being overjoyed.

The last stretch of the race is when I really started to notice my lack of training in the last month. My legs were very ready to be done, and this was the final stretch (or so I thought) as you come into the city of Nisswa there is most of the spectators, its a long straight stretch and you assume the end is close. But as you get closer you realize the marathoners have to take a right to continue their course, while you have to keep going 1 block, then turn right and then you see the finish line. And you’ve still got a decent sprint to get there. I dug deep and keep putting one foot in front of the other. (There’s a good chance other people can walk as fast as I was running) I got across the finish line and was bummed that there were medals for the half, the marathon and the relay, but no medal for me. I was so out of it I didn’t dare go into the tent for fuel. Instead I caught my breath, and an old friend recognized me! It was so great to see him and to finally meet his wife, I love how I’m able to reconnect with people as I get more into running.

Eventually I got my bearing and found my favorite race day fruit, oranges!!!

Yes I look like I’m in pain, but really, I was smiling on the inside. The nice thing about doing the 10k, but driving over with a half marathoner was I was able to have some time to change shirts, go to the bathroom, and get an iced coffee while still being able to see her finish. My official time was 1:11:22, although the chips were all pre-activated, so there is a very good chance that I did make the 1:10 mark. Either way, I celebrated. We had a post race lunch at Zorbas, stopped at the liquor store and went back to Aitkin to shower and meet up with friends to watch Aitkin’s Grand March.

Now that I’ve had time to look over my Garmin info…Here’s a little breakdown between Run for the Lakes 10k and the Securian 10k. (I had some issues turning off my watch, so I only took the info for 6 miles, and I don’t have an official time for the Securian run for some reason)

What I’m most proud of is the negative splits! Of course the Securian 10k was bitter cold, which had an effect on performance, you can read that review here.

Overall: I was so happy that Run for the Lakes allowed me to switch from the Half to the 10k! I was happy there were a few water stations, but am very glad I had my own water, as it aid was sporadic. The course was gorgeous, although the finish line takes some getting used to. I really wish I had received a medal (and I did ask for a half considering I paid for it, my plan was to puff paint the words “10k” on top of where it says 13.1, but they refused me). Finally, the tshirt was amazing! This is the first time I’ve gotten a race shirt that was absolutely perfect, lightweight, tech style that wasn’t too big or small, and a soft material!

Will I be doing this race again: Maybe, Run for the Lakes 5k was my first race ever (read about it here)! But there’s still the half, marathon, and relay marathon to attempt!