While having a staycation was not part of my “Summer” 2012 Goals, I accidently went on one this weekend. I planned on staying in Duluth and maybe cleaning up my apartment a bit. Instead I went out on Friday night, and while I didn’t bring my camera, I did remember to bring it with me on Saturday and Sunday.

I started the relaxing morning with sleeping in and going out to my favorite breakfast at Pizza Luce. I then did some window shopping and was overwhelmed by the heat, which led to a mid-day “lunch” of gelato at Va Bene Caffe. I had the salted carmel as pictured on the left, and the boyfriend had half pineapple half strawberry rhubarb.

I have also enjoyed a few delicious salads here in the past, and am hoping to someday stop for dinner. After window shopping we discussed that despite having lived in Duluth for over a year, we had never done the Fitgers Brewpub Tour.

If you are ever in Duluth and want an indoor activity (either due to the cold winter, or wanting to escape the heat of the summer) I really really recommend this. The tourguide was very knowledgeable but was able to dumb it down for those of us (like me) who know very little, and also able to speak at the level of professional brewers. (The 4 different taste tests may have helped). I’m not positive how many ounces fit into this glass, but it was bigger than a shot glass, and smaller than a pint glass.

After the tour all we wanted was more beer! (and some dinner to go with it)  which was consumed at the Brewhouse restaurant. And if you like beer, I suggest you check out the All Pints North event at Bayfront on Saturday, July 21. (I will be in Aitkin for the weekend and not attending, but will keep it as an option for next summer!) 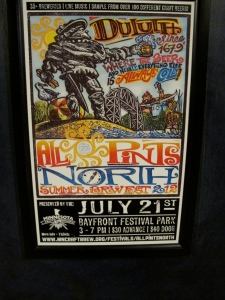 Sunday was a little more active with a hike at Chester Bowl. We were able to see a some of the destruction from the flood.

You could not see that road from the trails prior to the storm. However, there trails are still lovely.

I only saw one of these orange flowers on the 40 minute hike, but I thought it was beautiful.

This weekend was so relaxing and really something I needed after having a full 4th of July holiday with lots of family and friends, and a tough week at work it felt so good to just go with the flow and do what felt good in the moment. If you’re in need of a little escape, I really recommend coming to Duluth, if you stay out of Canal Park it can even be relaxing!