In honor of those of you (myself included) who are starting their New Year’s Resolutions, I would like to take a short moment to look back on my 2011 resolutions, what can work well, and what doesn’t work so well.

To review, 2011’s New Year Resolutions were to #1 Run 5 – 5ks, and #2 “cook more”. The ambiguous “cook more” resolution didn’t exactly set me up for attaining much. And that is why #2 of The Dirty Dozen is “learn 12 new recipes” by quantifying the goal, I am more able to monitor how I am doing.

My first 5k was completed on April 29, 2011. I signed up for the race sometime in early 2011. I simply started googling “5k minnesota” and found a race that happened to be near my hometown and the Friday night before my birthday. Due to living in Minnesota, it was important to me that I find a race later in the spring so I wouldn’t have to worry about weather conditions as much, and would potentially get some outdoor training. A few weeks before the race my mother actually said she’d like to race with me!

It was great to have her there to support me, but we did talk after this photo and decide we would race our own race, and find each other at the end. I started the race with the goal of finishing, but had the bonus goal of finishing under 30 minutes, and an ultimate goal of running the entire time. My mother decided she was going to do what she could, as she had some leg cramping on a training run a few weeks before the race and didn’t want to magnify an injury. Given that we had never ran a race before, these goals were attainable, and nothing to get too stressed about.

My mother is such an awesome power walker, she managed to pass people who were jogging! Unfortunately, she had the leg cramps again, so she wasn’t able to run. As for me, well….I did finish, I didn’t run the entire time, but my final time was 29:22:00. Want proof? In other words: goal met, bonus goal met, ultimate goal still attainable! 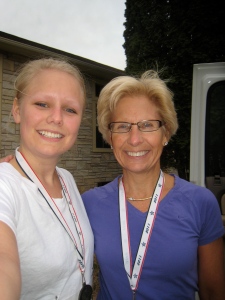 We were excited that we had tried something new AND succeed at it! The key to this was we set realistic goals, listened to our bodies, and had fun! When you cover those three elements, why wouldn’t you complete your New Years Resolution?